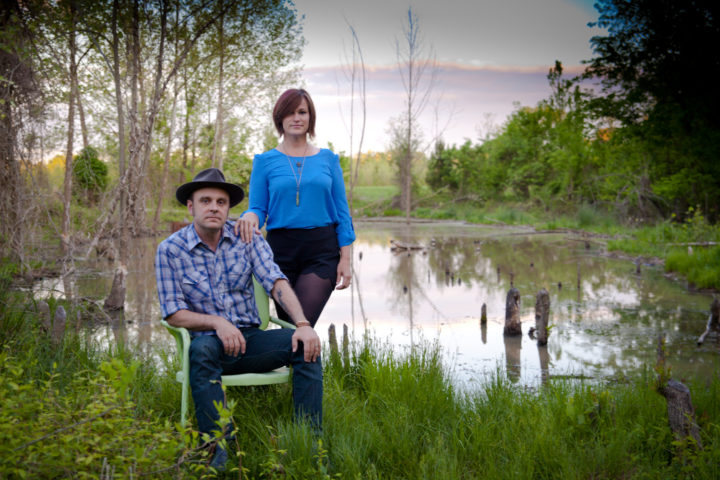 How does one describe those precious moments in life when we are able to transcend our small daily self-interests, and can somehow hold onto those rarified breaths of the deeper human experience?  Radiant, the new Wild Ponies album, out May 13 on No Evil Records, explores those moments with alternating delicacy and raucous abandon. At times, it’s as though Telisha is sitting right beside you, fingers on your shoulder, whispering in your ear. Seconds later it’s hard to believe this full, confidently reckless sound is coming from only four players (Telisha Williams, Doug Williams, Megan Jane and Fats Kaplin).

When you lay every fear and foible, every hurt and healing out for the whole world to see as Wild Ponies did on 2013’s Things That Used to Shine, the album’s follow-up surely can’t be faulted for cutting a little bit loose. That’s certainly the case with Radiant, the rough and tumble new release from Wild Ponies duo of Doug and Telisha Williams. The set bucks and rumbles through 11 songs that pull from all manner of sources, poetic tweens, Catawba trees, homophobic politicians, dying small towns, and tarot cards. The tie that binds them all together is the thread of moments and memories, of cycles and seasons, that make up a life well-lived.

For Doug, Radiant is about stepping outside of the Wild Ponies bubble. It’s about “trying to look at the world around us and how we relate to it, trying to find some empathy.” For Telisha, though, it’s also about simply stepping outside of her own skin. “When I listen to Shine, I hear the struggle. I hear the transition of a victim pushing, pulling, letting go, standing up, and shouting. It’s intense for me, and it’s been intense for some of our fans,” she explains. “This record sounds more stable and secure in some ways, and fresh and exploratory in others. I don’t think I could’ve gone to these same places if I remained in child victim- and survivor-land. There’s an acceptance and love for myself that I didn’t have before and that allows me to reach deeper within myself, and to reach out and connect to my community in ways that I wasn’t able to in the past.”

On Radiant, the Wild Ponies community includes songwriters like Amy Speace (“Born with a Broken Heart”), Sally Barris (“The Night We Never Met”), Jeff Barbra (“Mom and Pop”), and Amelia White (“Big Blue Sun,” “Home Is Where the Road Goes”), along with the aforementioned tween, Mariah Moore, whom Doug and Telisha met through volunteering with the Country Music Hall of Fame’s Words & Music program. The pair were so struck by the imagery of the then-12-year-old’s lyrics that they finessed them a bit, until her co-write emerged as the centerpiece — and title track — of Radiant. Telisha says of the various, sometimes unusual collaborations, “I have to admit, there’s probably a little defiance in all of this. Bucking the way things ‘should’ be done: ‘You can’t put a song you wrote with a 12-year-old on your REAL record!’”

She continues, “A good song is a good song, whether it’s written by a 12-year-old or an 80-year-old. We just want to make good art, and that usually means bending some rules.”

… which is where the catawba tree and tarot cards come in. The two songwriters had been working on what would become “Tower and the Wheel,” a tune that was partly inspired by an old tree on Doug’s grandparents’ farm. “I’ve known that tree my whole life,” he offers. “It knew my mom and my grandparents even way back before that. And, when my grandfather bought that farm, that tree was already really old. But she’s still there, strong as ever. That really is where we’d tie the horses, and where we’d pull the porch chairs around in the shade and the dirt and play songs, where Telisha and I cut our wedding cake. That’s a good place to look for perspective. It all turns, and it’ll all fall… but maybe not today.”

With the tree in mind, they had the song’s main theme, but were having trouble with the B-sections, so they laid out an eight-card tarot spread and let the symbols write the rest. “Nothing we were trying was working,” Doug says, “so we laid out eight cards and pretty much wrote all those B parts right from the way they fell. They lined up perfectly between our verses and finished the story for us.”

That’s just how it goes sometimes, and that’s why Wild Ponies are always open to receiving inspirations for songs from anywhere and everywhere. “We’ll take them however they want to come,” Telisha says, adding, “whether that’s through a dream, through tears and snot, or wrestling it out with the help of some friends. Melody or lyrics first? It doesn’t matter. The song chooses how to reveal itself.”

Doug picks up the train of thought, “My favorite songwriters are people who are curious, who are always looking at words and connections and asking questions — people who pick things up in strangers’ houses just to see what the bottom side of the ash tray looks like.”

Listeners who pick up the wonder of “Radiant” just to see what the bottom side of it might look like will find an answer in the over-the-whole-thing spirit of songs like “Unplug the Machine” and “Mom and Pop.” Doug sees the opposing pieces as two sides of the same coin. “With ‘Radiant,’ I feel like we discovered a connection — a web — or maybe an acknowledgment that we’re all locked together tighter than we want to admit sometimes,” he says. “There’s this ethereal wonderment at those connections and how beautiful and fragile they are. We’re all just atoms molded together — even the air between us.

“’Unplug the Machine’ and ‘Mom and Pop’ are extensions of that. Actions have consequences. None of this occurs in a vacuum. And it all just seems to repeat, over and over.”

“It’s the battle we’re all a part of,” Telisha adds. “Some days, you look up at the sky and can’t believe how beautiful things are, and that you get to be a part of it. Other days — or even later that same day — you’re caught in the swirl of people losing jobs, communities crumbling, and people spewing hate at each other through the anonymity of the Internet. We’re isolated and connected at the same time. It’s the 2016 version of glass half-full or empty. Which are you going to choose?”

One very full choice Wild Ponies made for Radiant comes in its sonic expression. Doug ditched his acoustic guitar in favor of plugging all the way in. Though it doesn’t represent a seismic shift in their sound compared to Shine, it is some distance from the original “Doug & Telisha” acoustic duo that fans once knew. Fear not, though, fans of folk. “I think we’ll always be a folk duo,” Doug insists. “I joke from stage sometimes that all my favorite folk musicians played a Telecaster — Joe Strummer, Merle Haggard, Bruce Springsteen, Bob Dylan…”

Indeed, in addition to the full-band version of Radiant, Wild Ponies are also releasing a limited edition Acoustic Demo version of the record that a mere 500 loyal followers will get to enjoy — though even that one rocks, at least a little. “The edge is still there… without the electricity, tubes, and drums,” Telisha says. “The Acoustic Demo version of ‘Unplug the Machine’ is wild. It’s more mellow, for sure, but you still see the fist shaking, clenched jaw pushing back, refusing to get dragged down.”

Further still, plans are already in the works for the summer recording of an all-acoustic project. As Doug tells it, “We’re going to record it underneath that catawba tree with a bunch of guys my grandfather used to play with in Virginia and a bunch of our Nashville friends — throw ‘em all together and see what happens. Maybe that one will turn into a real rock and roll record.”

As independent artists in an uncertain world, Doug and Telisha know they are lucky to be in this Wild Ponies thing with all those friends and with each other. Sure, there are some trade-offs, but that’s just the cost of doing business. “To be honest, for us, there aren’t a lot of cons,” Telisha muses. “It’s all an adventure, and we’re in it together — literally, every single mile. Since we’ve been traveling more as a band over the past couple of years, we’re even more aware of how fortunate we are to get to share this dream.”

But the dream is also a job. “It’s the craziest, most amazing, hardest, most enjoyable, fulfilling, and draining job I can imagine,” she says. And it requires the two to wear a lot of different hats: graphic designer, tour manager, merchandise coordinator, travel agent, and more. Though Telisha wouldn’t trade it for any other job in the world, she does confess that, “I wish the answer was, ‘We sleep until noon, write in our journals until 2, go for a run, then play our instruments for a couple of hours and write songs while we drink whiskey until 2 am.’ Although the bedtime is pretty accurate, the rest of that story is, sadly, some B.S.”

Doug echoes her sentiment: “I wish I could say that this job is all just sitting around, getting high, writing songs, traveling the world, going to our favorite Thai restaurant in Amsterdam, but the truth is… okay… maybe that is the truth.”

No matter how little truth is in that particular job description, there’s a lot more of it in the songs on Radiant.