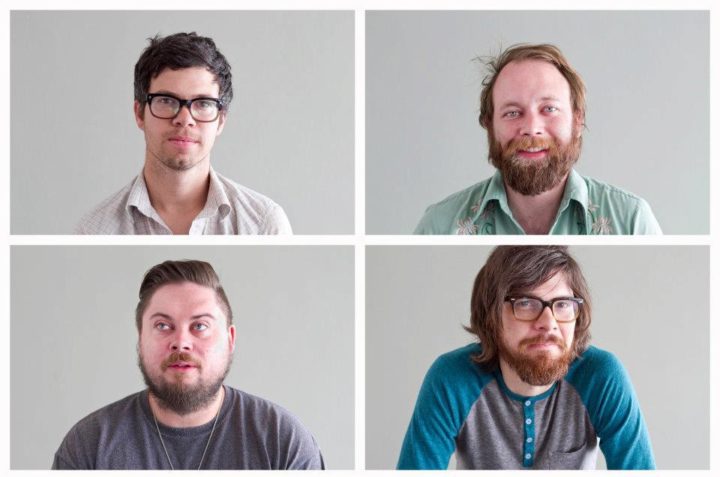 The Lubbock based sextet, which includes Fluitt, Colt Miller, Clint Miller, Cory Ames, Kris Killingsworth, and Amanda Shires on fiddle and vocals, have been touring together for a decade after meeting at the musical South Plains College. They are neither of the typical Texas-based types of bands – a country-rock mélange or strictly indie rock. As Buddy Magazine points out, “Thrift Store Cowboys’ feel is more, for a lack of better description, gypsy desert music – the free sound of spacey, heat-induced delirium…a sure, confident sound backed by thoughtful vision.” Schumacher produced their 2007 release, Lay Low While Crawling or Creeping, of which Austin Sound said, “the album is to country music what Jim Jarmusch’s film Deadman was to the western.”

“Probably one of the most uplifting songs I’ve ever written in my life,” says Fluitt of the billowing lead track “One Gentle Inch to Nine Violent Miles,” about “that moment that you stop staring at the ground in strife and disbelief.” It’s followed by “Bright Fire,” a jangley roots rocker. But the western spirit starts creeping in with the felon-charged “7s and 9s” and then significantly on the haunting “Scary Weeds,” penned and sung by Amanda Shires, who started as a sidewoman at the age of 16 with the legendary Texas Playboys and released her own solo album West Cross Timbers last year. She also contributes the begging and beautiful “Lean Into the Sway.”

As for ghost stories, Fluitt wrote the epic “Nothing” about a division of Buffalo Soldiers in the late 1880s, in pursuit of attacking Comanches, who knowingly led them in disorienting circles around a buffalo-grassed and treeless flatland to die of thirst. Fluitt interestingly “takes this story as a call and response, between a dead soldier and his wife, showing the tribulations each had, him on the plains, and her at their house. Both were left with nothing.”

Fluitt also explores the Spanish Civil War via a character from The Cypresses Believe in God, by Jose Maria Gironella for the song “You Can’t See The Light.” “In the book, ‘Caesar’ who was studying to be a priest, was imprisoned by the Anarchists, and in strange twists, he was executed instead of rescued. This was the first song of a concept album I hope to write about the trilogy of books.”

Thrift Store Cowboys have been slogging out consistent touring with growing audiences for 10 years, but historically most young bands implode at year three, crammed in a smelly van together. This band makes it because they “keep growing and changing musically,” says Fluitt. True too, they initially and wrongly got lumped in with the Texas country-rockish bands that essentially write the same songs over and over again, but ducked that subset pretty quickly. They met Schumacher while playing with DeVotchKa, says Fluitt, and did both Light-Fighter and Lay Low While Crawling and Creeping at the heralded Wave Lab Studio in Tucson.

For the new record, “we tried to capture the dynamics of our live shows.” As well the band up until now, has been doing everything 100% themselves — and for this record they are working with TopSpin, as well as indie distribution and marketing. “It’s like getting to the top of a mountain and finding a 300-foot wall, you gotta throw a rope over to help you get to the other side,” says Fluitt. Thrift Store Cowboys kick off a month-long tour on West Coast in September, and will be on the road all year in support of Light-Fighter.