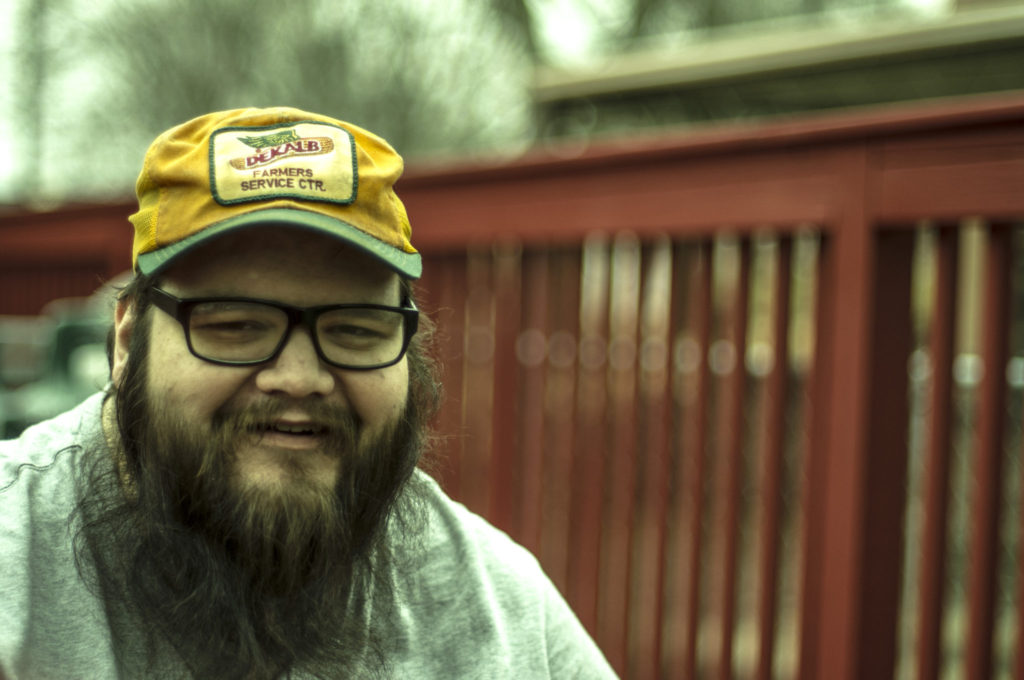 Some days, being John Moreland has to hurt. As others bury experiences and stifle regrets, Moreland pokes old wounds until you’re sure they’ve got to be bleeding again. It’s painful. But in Moreland’s care, it’s also breathtakingly beautiful. With the release of his highly anticipated third solo album High on Tulsa Heat (out April 21st via Thirty Tigers), he offers another round of the lyrics-first, gorgeously plaintive songs that have earned him devoted listeners across the country.

Moreland started writing when he was 10 years old, the same year his family moved from Kentucky, to Tulsa, Oklahoma, where he still lives today. He turns 30 this year, but he’s been slinging songs for more than half his life. He started fronting local punk and hardcore bands in high school. After graduation, he had an epiphany. “I’d just overexposed myself to punk and hardcore to the point that it just didn’t do anything for me anymore,” he says. The remedy? He ditched his music for his dad’s: CCR, Neil Young, Tom Petty, Steve Earle.

“I think what appealed to me about it was lyrics,” he says. “In hardcore, there might be great lyrics in a song but you have to read them off a piece of paper to know it. I was 19 in 2004, and Steve Earle had put out ‘The Revolution Starts Now,’ and I remember hearing the song ‘Rich Man’s War’ and totally feeling like somebody just punched me in the chest.”

Moreland’s been chasing the chest punch ever since, composing pointedly and prodigiously. “I’ve always written to make myself feel better, I think,” he says. “It’s my way of figuring stuff out — figuring out where I stand. You can’t do that without emotion. You can’t do that insincerely.”

When Moreland released In the Throes in June of 2013, the album didn’t just charm listeners — it stunned them. American Songwriter proclaimed that “[t]hose not familiar with the Oklahoma City singer-songwriter should remedy that pronto,” while No Depression declared the collection “isn’t so much songwriting as alchemy with words and music.” MSNBC host Rachel Maddow heard his songs and joined the chorus, tweeting: “If the American music business made any sense, guys like John Moreland would be household names.”

If In the Throes ignited Moreland’s 2013 summer, FX’s Sons of Anarchy poured gasoline all over the fire that fall. The hit series featured three Moreland-penned and -performed gems: “Heaven,” off of his Earthbound Blues, the second of two full-length albums he released in 2011; and “Gospel” and “Your Spell,” both from In the Throes.

As word continued to spread and Moreland played more and more shows, a pattern began to emerge: his songs hit listeners hard. While his precise, evocative lyrics often get the credit, his voice — a scritchy-scratch baritone capable of soul-shouting but especially potent in its subdued default register — ensures his lines linger.

“I got so used to playing in bars where you’re just kind of in a corner,” he says. “You’re just background music, and nobody gives a fuck about you. It was so soul sucking. I would try to sing in a way that would get people’s attention.”

For Moreland, that didn’t mean screaming or gimmicks. “If you just sing it like you mean it — like so hard that people can’t ignore it…” He trails off for a second, then concludes: “That’s what I was trying to do.”

When he decided to head back to the studio to record the follow-up to In the Throes, Moreland admits he felt more pressure than in previous sessions. “I just tried to ignore it because I figured it’s probably not a good way to make a record,” he says. “But yeah. It was in the back of my mind.”

Stripped-down arrangements rooted in gritty rock and roll punctuate and cushion Moreland’s compositions. Tracks including “Hang Me in the Tulsa County Stars,” “Heart’s Too Heavy,” and “Cleveland County Blues” set the tone, trafficking in relentless honesty and folk.

Buoyant lament “Sad Baptist Rain” tackles internal conflict. “I was just trying to grab this scene of being a 16-year-old church kid in the parking lot of the punk rock show trying to reconcile having some fun with my Southern Baptist guilt,” he says, with a hint of a laugh. If “Sad Baptist Rain” is about self-acceptance, “White Flag” warns of self-destruction. “It’s a song about wanting or needing somebody so bad that you’re willing to destroy yourself for it,” he explains.

“American Flags in Black and White,” grapples with nostalgia, and while Moreland initially seems to condemn it, he ends up acknowledging its comfort, framing the past as everyone’s guilty pleasure.  He never really condemns or judges anyone — except himself.  “Anytime I do write a song that I feel like is more like pointing a finger at somebody, it never feels good and I always just end up throwing it away,” he says.

The album also includes the first recording of live show staple “Cherokee.” Based on a vivid dream, the song explores longing, shame, forgiveness, and love. “I want it to be open ended,” he says of “Cherokee” and his songs in general. “I don’t want to be told what happened or how to feel.”

“You Don’t Care for Me Enough to Cry” proves once again that Moreland does intoxicatingly sad as well or better than anyone, but the concluding title track rollicks victoriously, relishing the thought of a safe place — an idea Moreland says serves as a loose theme for the album. “A home is something I’ve really wanted,” he says. “But that means you have to figure out what that really means and what it is. The record is about those questions.”