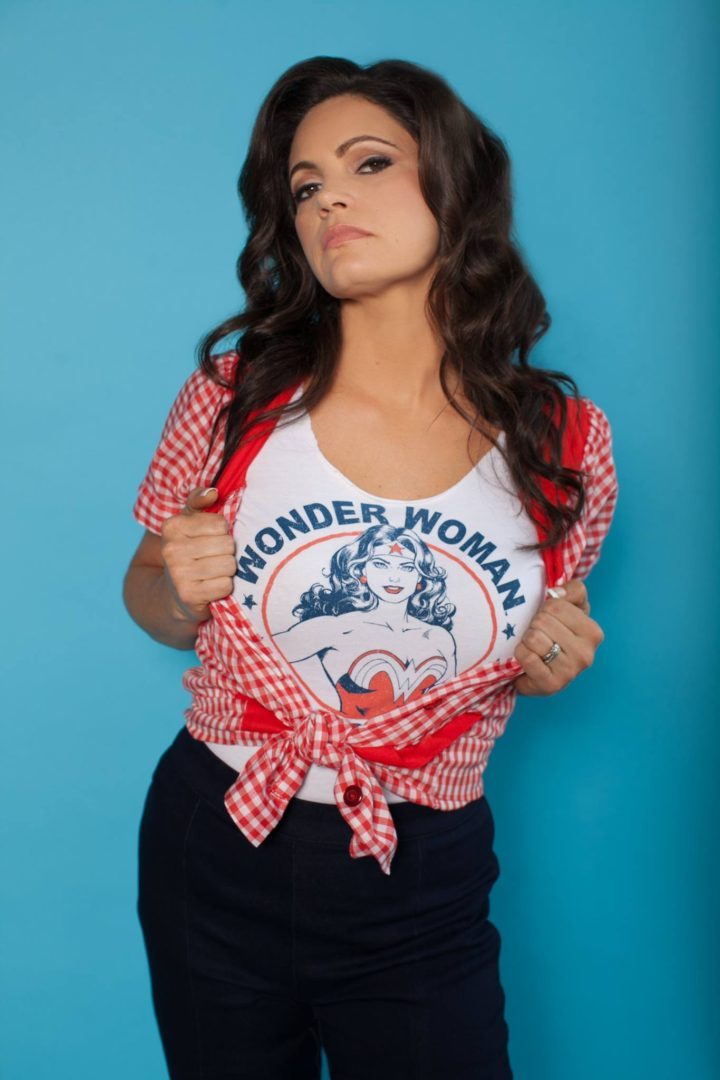 If there’s a pedigree for a modern country music star, then Angaleena Presley fits all of the criteria: a coal miner’s daughter; native of Beauty, Kentucky; a direct descendent of the original feuding McCoys; a one-time single mother; a graduate of both the school of hard knocks and college; a former cashier at both Wal-Mart and Winn-Dixie.  Perhaps best of all the member of Platinum-selling Pistol Annies (with Miranda Lambert and Ashley Monroe) says she “doesn’t know how to not tell the truth.”

That truth shines through on her much-anticipated debut album, American Middle Class, which she co-produced with Jordan Powell.  Yet this is not only the kind of truth that country music has always been known for—American Middle Class takes it a step further by not only being a revealing memoir of Presley’s colorful experiences but also a powerful look at contemporary rural American life.  “I have lived every minute on this record.  My mama ain’t none too happy about me spreading my business around but I have to do it,” Presley says.  “It’s the experience of my life from birth to now.”

Yet the specificity of the album’s twelve gems only makes it more universal.  While zooming in on the details of her own life, Presley exposes themes to which everyone can relate.   The album explores everything from a terrible economy to unexpected pregnancies to drug abuse in tightly written songs that transcend the specific and become tales of our shared experiences.  “I think a good song is one where people listen to a very personal story and think ‘That’s my story, too,’” Presley says.

She has created a hugely resonant album, one that is simultaneously a completely new sound and also deeply entrenched in the beloved traditions of country music, much like Presley herself. Her early life in the mountains was one that taught her to respect her heritage while being invested in the future at the same time.  Her parents made sure she knew Carole King and Janis Joplin as well as Ralph Stanley, Merle Haggard, and Bill Monroe.  She studied the melodies and lyrics of Indigo Girls yet sometimes skipped school so she could drive over to Loretta Lynn’s home at Butcher Holler to seek inspiration.

Presley grew up in a place where the lush mountains and dignity of the people were juxtaposed against a spreading prescription pill problem and rampant unemployment.  She doesn’t hold back from exploring these tough issues while also managing to have a rollicking time on the record, often combining the harder subjects with a more driving and joyous delivery but without ever sacrificing the seriousness of the topics she is cutting wide open.

Before creating this solo effort Presley meticulously crafted her own sound for years.  “I have paid my dues.  I’ve been through the grind, and so many people have told me no.  But I kept on making music.  I had to,” Presley says.  “I never would compromise because I couldn’t.  Part of the waiting has been my own unwillingness to follow the formula but now I feel like the formula has caught up with me.  Maybe I was just ahead of my time.”

That particular sound is one that is equal parts tradition and originality on a concept album in the tradition of Willie Nelson’s Red Headed Stranger or Springsteen’s Tunnel of Love, albums that tell a succinct and powerful story through a signature sound and masterful songwriting of true artists.  Presley knows how to have a big time but she is also fiercely dedicated to her music, keenly intelligent, and determined to tell her own truth.

Presley wrote five of the twelve songs by herself and her co-writers are a virtual Who’s-Who of the best songwriters in the business:  Mark D. Sanders, Matraca Berg, Lori McKenna, Sarah Siskind, Bob Dipero, Barry Dean, and Luke Laird.  She credits her co-producer, Jordan Powell, with assembling an enviable cast of pickers on a record that allows room for the instrumentalists to shine.  Among them are Keith Gattis (who’s acoustic solo on “Life of the Party” offers a standout moment) and Audley Freed on guitars,mandolins, and dobros; Josh Grange on a beautifully grieving pedal steel; mandolins, and dobros; Fred Elrtingham keeps things rocking along on drums; Grammy winner Glenn Worff and Motown-influenced Aden Bubeck on bass (with both upright and electric bass adding sizzle to “Knocked Up”), David Henry on haunting cello and strings; and John Henry Trinko driving it all home with a wonderful job on organ and piano.  To cap it all off, there are also amazing harmony vocals from standouts such as Patty Loveless, Chris Stapleton, Angie Primm, Keith Gattis, Kelly Archer, Sarah Siskind, Gale Mayes and Emily Saliers (Indigo Girls).

The honesty, the aching delivery, the picking, the beautifully crafted songs—they all come together to form an album that has been awaited with bated breath by fans and the industry alike and does not disappoint, announcing a bonafide country music star who doesn’t just have the pedigree, she also has the magic in her to transform and move her listeners.

“In this fast-paced day and age, it’s so hard for us to slow down and live in the moment,” Presley says. “I just hope my songs can be three minutes for a person to experience something in the moment, to connect, and to feel something, whether that be tragedy or joy or something in between.  I want to tell the truth.”

That truth is something that listeners know when they hear it.  It’s the solid truth of someone like Presley, who doesn’t just talk the talk but has walked the walk and knows what she’s talking about.  That’s real country music and with American Middle Class Angaleena Presley emerges as the clear, fierce, and joyous voice of her generation.